The 2nd Congress of The International Domestic Workers Federation (IDWF) Will Take Place Nov 16 to 19 In Cape Town, South Africa 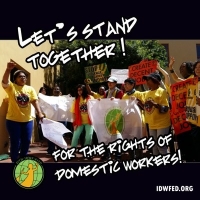 Cape Town, South Africa – Over 200 advocates for the rights of domestic workers will gather in Cape Town on the 16th to 19th of this month, as the International Domestic Workers Federation (IDWF) celebrates its five-year anniversary by convening its second Congress. Representatives from IDWF’s 69 affiliated organizations from 55 different countries will come together to discuss the challenges facing domestic workers globally and consult on strategies and solutions, hoping to take inspiration from the achievements of the host country in ridding itself of apartheid and its fight for freedom of its oppressed.

South Africa is also home to IDWF’s President, Myrtle Witbooi, who has been involved in the struggle for domestic workers’ rights since the 60s under apartheid, when domestic workers had no legal recourse to protest their Masters. Now South Africa has some of the most progressive domestic worker laws in the global south, and the local organization is actively lobbying for more protections. The country has ratified the ILO Convention 189 on Decent Work for Domestic Workers.  Last month, the parliament expanded the COIDA, the occupational health and safety bill, to include all domestic workers.

Witbooi says, “Our work is decent work, and our work makes all work possible.”

There are more than 67 million domestic workers worldwide: cleaners, cooks, caregivers for children, the elderly, and the disabled, as well as others employed in homes. This number is growing rapidly to meet the global ‘care gap’, as need for care givers increases with fewer family members able to stay at home and forego employment, combined with longer life expectancies for the infirm and elderly. Yet, domestic work is routinely undervalued and most domestic workers do not have the same labour protections as other workers.

Throughout the world, groups of domestic workers are standing up to discrimination, rallying for laws that protect both the labour and human rights of domestic workers. At the International Labour Conference in 2011, domestic worker organizations mobilized as a global united force to achieve an international convention to protect their rights – the C189 on Decent Work for Domestic Workers.  Following that achievement, and to push for global ratification of C189, the IDWF was formed at its founding Congress in Montevideo, Uruguay in 2013.

Five years later, IDWF has successfully achieved projects that further its goals throughout the world, championing domestic workers, developing the capacity of fledgling affiliates, advocating for countries to ratify C189, and campaigning for local laws that protect domestic workers.

This Congress will allow the members of IDWF a rare and exciting opportunity to share knowledge, affirm their goals, develop their priorities, and make changes to their strategies where necessary.   The key issues to be deliberated include:

Addressing discrimination against domestic workers, especially those who are black, migrants and other minority communities;

Identifying the next target countries to ratify the C189 and legal reforms to protect domestic workers;

Developing a rights-based framework for domestic workers in the growing care economy; and

Furthermore, the representatives at the Congress will vote on a new 13-member Executive Committee as well as several proposed changes to the constitution. Guest speakers will come from the Labour Ministry of South Africa, the global organizations of International Union of Food Workers Associations (IUF), International Labour Organization (ILO) and Women In the Informal Employment – Globalizing and Organizing (WIEGO), as well as from local organizations, including the Congress of South African Trade Unions (CONSATU) and the South African Domestic Workers’ Union (SADSAWU).

Guests include representatives from groups interested in the rights of women, migrants, and workers, as well as academics and trade unionists. But it is the domestic workers who will be the focus of Congress.

As Witbooi says, “There is no difference between us, we all work for employers, we all suffer the same, we all understand low wages. We are workers and our work is decent work.  And like we say: nothing for us, without us. ”

The 2nd Congress of the International Domestic Workers Federation (IDWF) will take place Nov 16 to 19 in Cape Town, South Africa

Myrtle Witbooi, President of IDWF on the Importance of C189
Tweet